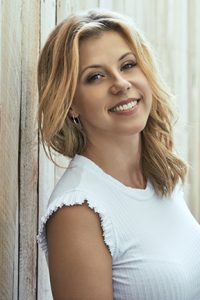 Georgia Southern University’s School of Nursing will host entrepreneur, actress, producer and author Jodie Sweetin to share her inspirational and sobering message of resilience and triumph over substance abuse on March 11. Sweetin’s presentation, “The Road to Recovery,” is free and open to the public and will take place on the University’s Armstrong Campus in the Fine Arts Building Auditorium at 7 p.m.

Sweetin is known for her role as Stephanie Tanner on ABC’s long-running sitcom “Full House,” which still airs in syndication. She recently returned to her role as “Stephanie” in the successful Netflix reboot “Fuller House,” which has won numerous awards. In addition, she has starred in several Hallmark movies and POP TV’s unscripted comedy, “Hollywood Darlings,” for which she also served as co-executive producer.

Her 2009 memoir, UnSweetined, documents her life growing up in the spotlight and the years after, and is a deeply personal account of her identity crisis, the double-life she led as a child actress, and the strength and courage she found to overcome addiction. In sharing her story, she hopes she has been able to help others confront their issues head-on and move forward.

“Our hope is that Jodie will bring a heightened awareness of the multifaceted aspect of drug and alcohol abuse and recovery, and how it not only affects the individual, but affects the individual’s loved ones as well,” said Waters College of Health Professions Dean Barry Joyner, Ph.D. “Through the Advanced Practice Nurse-Psychiatric Mental Health Nurse Practitioner (APN-PMHNP) track, our dedicated School of Nursing faculty are leading the way in bridging the gap for patients in rural and underserved communities to access quality mental healthcare.”

Sweetin will visit Georgia Southern in collaboration with the University’s School of Nursing, which established the APN-PMHNP track in 2015 to uniquely serve the psychiatric and mental health needs of rural and underserved communities. Georgia Southern is the only university in the state to focus on telemedicine training. The seven-course online track partners with clinical environments that provide team-based care, includes on campus simulation learning experiences, and previously included short summer intensive sessions with national content experts.

The event is supported by the Health Resources and Services Administration (HRSA) of the U.S. Department of Health and Human Services (HHS) as part of an award to the University’s School of Nursing for advanced nursing education totaling $1,588,794 with zero percent financed with non-governmental sources. The contents are those of the author(s) and do not necessarily represent the official views of, nor an endorsement, by HRSA, HHS, or the U.S. Government. For more information, please visit HRSA.gov.