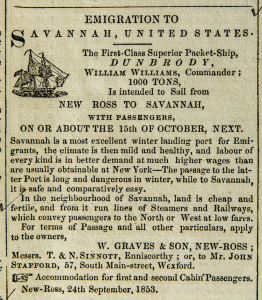 Visitors to the Dunbrody Emigrant Experience Center, a world-class visitor center in the historic river port of New Ross, County Wexford, Ireland, will soon be able to experience a taste of Savannah, thanks to several Georgia Southern University students.

The students conducted primary-source research at archives in Savannah and in Ireland, and a permanent exhibition based on their discoveries is now being developed for the Dunbrody Center, which welcomes more than 110,000 visitors annually. The facility’s principal attraction is a full-scale reproduction of a three-mast, transatlantic sailing ship, the Dunbrody, which operated out of New Ross between 1845 and 1869.

“Our students determined that the Dunbrody’s first ever commercial voyage was to Savannah, seeking Georgia timber and that subsequent voyages by it and its sister ships brought immigrants from southeastern Ireland to the Hostess City,” said Howard Keeley, Ph.D., director of Georgia Southern’s Center for Irish Research and Teaching (C.I.R.T.). “That multifaceted story is what the exhibition will convey, providing Irish, European and other international visitors with compelling text and images about Savannah, a city that may not have been on their radar.”

Undergraduate honors student Noelle Anderson, a native of Fortson, Georgia, was part of the research team that identified and analyzed documents at such repositories as the city of Savannah Research Library and Municipal Archives and the National Archives of Ireland.

“One artifact useful for the exhibition is an invoice, dated Feb. 8, 1847, from the Savannah factory, Andrew Low & Co., for various kinds of timber,” Anderson said. “We discovered the invoice in an uncatalogued box of papers in an Irish archive, and it helps bring the trading link to life.”

Seán Connick, director of the Dunbrody Emigrant Experience Center, is thrilled with the detailed work conducted and curated by the student-researchers from Georgia Southern.

“The students are providing a new and much more nuanced narrative about the original vessel,” said Connick in a video link from aboard the Dunbrody reproduction. “We had almost no knowledge of the complex trading and human links that existed between our port and Savannah during the mid-19th century.

“Until now, we thought of the Dunbrody primarily as a famine ship: a means of escaping Ireland during our Great Hunger or potato famine,” he continued. “ We knew a great deal about its conveying passengers to Québec and New York, but the students’ work is demonstrating that Savannah-bound passengers, while distressed, were not destitute and that Georgia timber enjoyed high demand from brewers, railroad-builders and others in our region.”

Recent graduate Bernadette O’Donnell (’18) was also a part of the student research team that made some of these discoveries.

“We used the Dunbrody Emigrant Experience Center as a case study in my capstone International Studies course, and I was also was a member of the archives-based undergraduate research program that, working in Savannah and Ireland, discovered and assembled the material now being used for the permanent exhibition,” O’Donnell said. “It’s great to have our work educate and excite people about Savannah. The exhibition will encourage tourism from Europe to Savannah.”

“We secured more than $40,000 in funding for this project, with half of it as a matching grant from stakeholders in Savannah,” said Keeley. “Such entities as Visit Savannah and the Savannah-Hilton Head Airport Authority see real worth in the exhibition. It’s a way of placing Savannah’s rich history and its heritage-tourism assets before large numbers of discerning Europeans.

“It also augments the TradeBridge initiative, a collaboration between C.I.R.T., the Savannah Economic Development Authority and Ireland-based partners that, in its first 10 months, has secured major European distribution deals for several Savannah companies and has seen an Irish maritime company establish its U.S. headquarters in Savannah,” Keeley added. “We’re gratified that our students’ work is not only getting deployed in a real-world situation but is also advancing the economic vitality of Savannah and our region.”