Georgia Southern to host free screening of “The School in the Cloud,” Q&A with area experts to follow 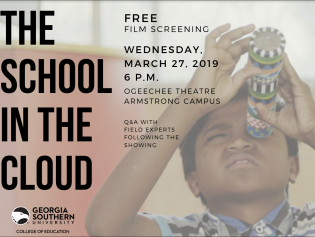 On Wednesday, March 27, Georgia Southern University College of Education (COE) will host a screening of “The School in the Cloud,” a film that explores the potential of self-organized learning. The screening, which is free and open to the public, will begin at 6 p.m. in the Ogeechee Theatre, located in the Student Union on the Armstrong Campus.

The documentary follows a three-year experiment conducted by Sugata Mitra, a professor of educational technology in England, in which unmanned internet kiosks were installed in varying locations from remote villages in West Bengal to a school in northeast England. Mitra’s work demonstrates and examines the ability of children to self-organize their learning.

Mitra’s project began in 1999 with small-scale experiments to garner public attention. His research continued to show that groups of students, if given access to the internet, can learn almost anything on their own. Mitra’s efforts earned him the first-ever $1 million TED Prize award, which he used to help create the first School in the Cloud lab, where students, regardless of socioeconomic status, could engage and connect with information and mentors online. Located in Killingsworth, England, the lab opened its doors in December 2013, and now seven additional labs have since been pioneered all over the world.

According to Mitra, a Self-Organized Learning Environment (SOLE) can exist anywhere there is a device with access to the internet and students ready to learn. Through his research, the School in the Cloud website now provides materials and toolkits to assist people across the world with creating a SOLE and running SOLE sessions.

Following the screening, the COE will host a Q & A session with local professionals in the fields of education, instructional technology and child psychology.

This screening is a part of the “Education Exposed Film Series” that is taking place on the Armstrong Campus throughout the Spring 2019 semester. The series is being offered at no charge to students or the community as a result of a Campus Life Enrichment Committee grant written and received by COE faculty members Regina Rahimi, Ed.D., Kathleen Burke-Fabrikant, Ed.D., and David Owens, Ph.D.

The remaining screening in the series will be “Elementary Genocide” on April 16.

For more information on “The School in the Cloud,” visit: www.theschoolinthecloud.org.