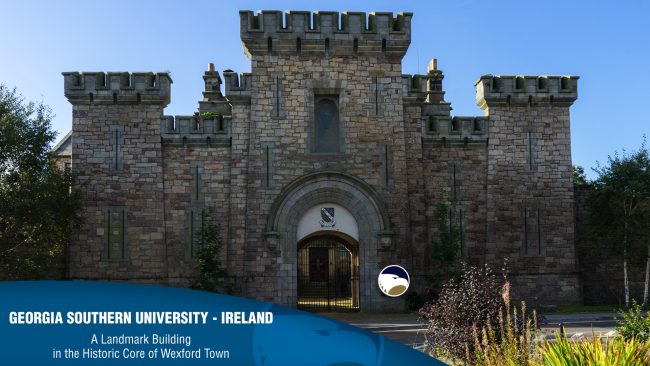 On the 24th anniversary of its founding, Georgia Southern University’s Center for Irish Research and Teaching (CIRT) is moving in new directions locally and abroad to provide unparalleled opportunities for students. The University announced Monday the center is relocating from the University’s Statesboro Campus to the Armstrong Campus in Savannah and will be bolstered by a new learning center being established on the southeast coast of Ireland.

Through the center, Georgia Southern faculty and students have long been examining the connection between Savannah and Ireland. The Wexford-Savannah Axis research continues to shine a light on how and why so many people from Wexford and southeastern Ireland immigrated to Savannah in the 19th century and highlights the impact this immigration had on Irish and American generations in both countries.

Through this partnership and the generosity of Irish officials, Georgia Southern’s learning center will be housed in a historic building constructed in 1812. The space will feature classrooms and student apartments built in a former historic jail.

“Georgia Southern is a university that is focused on student success, and it’s so fitting to me that this project started with students, whose curiosity lead them to new countries and new people and new ideas,” said Georgia Southern President Shelley Nickel. “That’s what our University is about, and I look forward to the new connections and discoveries they’ll make through this research.”

Moving the CIRT from Statesboro to Savannah enables student researchers to continue to the connection between Savannah and Ireland, further bridging the gap between the two while promoting tourism and economic development. A new location on the University’s Armstrong Campus in Savannah also provides a public space and improves access to the research findings for the community.

Several Irish officials traveled to Savannah to be part of the announcement, including Keith Doyle, chair of Wexford County Council, and the Honorable Shane Stephens, consul general of Ireland for the Southeastern United States.

Thanks to efforts by Georgia Southern University’s CIRT, the Savannah Economic Development Authority (SEDA) selected Ireland as one of its six target countries. As a result, at least six trade-and-investment delegations have occurred, and last March a formal initiative, Wexford-Savannah TradeBridge, was launched. Although less than a year old, TradeBridge has resulted in some great outcomes, such as a major Southeastern US distribution deal for Survipod, a Wexford manufacturer of innovative surveying tools. The Savannah Bee Company has contracted a broad-based distribution deal into Ireland, while Raceix, an Irish company in the motor-boat tech sector, has announced Savannah as the choice for its North American headquarters.

“From SEDA’s perspective, the connection between Georgia Southern and Ireland can only further support the trade and investment projects that we’ve worked on thus far.” said John Coleman, vice chair of the Board of Directors of SEDA. “Georgia Southern’s presence in Ireland presents immeasurable opportunities not only for students but also for the local economies involved. We know that a strong economy would not exist without a strong educational system. International studies and priceless experiences giving graduates the competitive edge as they enter the workforce. We are a delighted that today’s Eagles will have an opportunity abroad before they become tomorrow’s leaders.”