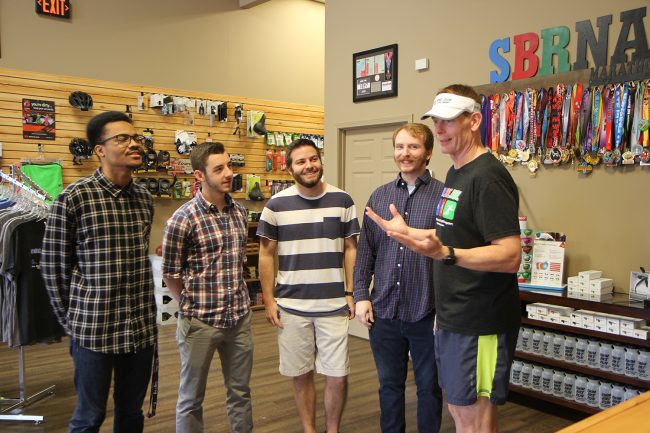 Ghost Runner, an app designed to “gamify” running by encouraging virtual running competitions among friends, was selected for the inaugural Georgia InVenture Prize competition by panelists at the Georgia Southern University Business Innovation Group’s (BIG) annual 3 Day Startup (3DS). The app was designed by four students in the Allen E. Paulson College of Engineering and Computing and three College of Arts and Humanities students.

“The goal for the app is to give people motivation to run that is instantaneous using gamification methods,” Martin said. “We also want runners to be able to explore the area by having other runners curate routes. This way, people don’t have to run the same route every time they go out.”

The idea was deemed by panelists made up of the University’s Intellectual Property Committee to be the one that made the most progress during the three days teams had to prepare their ideas.

“Ghost Runner seemed scalable,” said panelist and Georgia Southern Professor of History and Director of Digital Humanities, Robert Batchelor, Ph.D. “I really liked the idea that it solved a problem of messy apps for this concept currently on the market, and it was something that small businesses, running tournaments, etc., could rely upon as an app solution to marketing.”

Martin said the development team wants to build a community for the app on a local level.

“We want to team up with local businesses to sponsor the app as well as runs that begin and end at their store,” he said. “The business can get foot traffic, and the runners will have a common place to meet up, run together and share their experiences.”

The team used it’s members’ strengths within their different majors to finalize the prototype for the app in such a short time frame.

“We broke up our roles from a high level into three different parts,” Joachim said. “We have a programming team, a numbers team and a design team. We all played important roles in shaping the app’s progression over the course of 3DS.”

The students have been worked with BIG to prepare for the inaugural Georgia InVenture Prize Competition. Each college and university in the state was invited to send one team to Atlanta to compete April 3 through 4. Nineteen teams qualified to compete, including Ghost Runner. The top five finalists presented live via broadcast and streaming through Georgia Public Broadcasting (GPB) with up to $50,000 in cash prizes and in-kind professional services up for grabs.

Tags: College of Arts and Humanities, College of Engineering and Computing