Georgia Southern University is showing that the distance between its three campuses is just a number for students by introducing the site-synchronous classrooms pilot program, which uses state-of-the-art cameras in classrooms to connect students in Statesboro, Savannah and Hinesville.

The classes taught in this new synchronous-learning environment still bring students together with either the instructor or a teaching assistant in the physical classroom on their primary campuses. In a traditional distance education class, professors would give out information to students who are dispersed. The pilot classes at Georgia Southern maintain a traditional face-to-face atmosphere with everything happening in real time, allowing for more natural discussion. 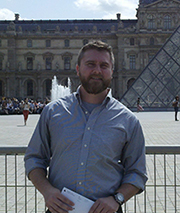 Faculty senate president and Associate Professor of Literature Dustin Anderson, Ph.D., said the discussion-based format, combined with the campuses coming together, affords him and the students new opportunities.

The idea for the interconnected site-synchronous environment came from the Georgia Southern faculty senate’s implementation of a similar system and from research and working with other higher education institutions.

Because the faculty senate represents the entire university, it was determined early on that senate members shouldn’t have to commute to attend meetings. As the newly elected president, Anderson was tasked with finding a way technologically to make the meetings cohesive. He worked with Information Technology Services (ITS) to create a virtual peer-to-peer environment by using cameras set up in the counterpart senate chambers.

“I call it the ‘I-16 portal,’” Anderson said. “In the Nessmith-Lane Building, we have our regular senate setup with a U-shaped table, and it’s facing a big screen with the same setup telecasted from Savannah. It feels like we have one big table that’s separated by the membrane of the screen.”

After seeing the system work well for senate meetings and finding out some of his students were driving from Hinesville to Statesboro for one of his classes, Anderson, worked alongside engineering faculty and ITS staff to try it out in a classroom setting. ITS and the Office of the Provost provided funds for the equipment, and ITS set it up to ensure the interconnected classroom environment. The College of Engineering and Computing (CEC) was the first college to request the technology.

Anderson said the classes also give students more freedom when making their schedule, particularly nontraditional students who have responsibilities outside of going to school.

“Some students can’t take certain classes because they have a job, or they have kids whose daycare doesn’t start until a certain time,” he said. “As a university, we want to provide environments for our students to succeed in. Some students do phenomenally well in small, face-to-face classes, but others may thrive in online or large-class environments because they don’t feel like they’re being put on the spot as much.”

Right now the site-synchronous environment is being used in one of Anderson’s literature classes, “Liars, Guns, & Money,” as well as in a couple courses in the CEC, such as Comparative Languages taught by Daniel Liang, Ph.D. Anderson said he hopes there are more courses offered in this environment in the future.

“If the students like this format and push to have it be a part of their student technology fees, I could see these spaces growing exponentially,” he said. “The students are used to learning in so many different ways. Being separated by a screen isn’t a tremendous issue for them. My goal is to train more faculty to learn how to teach in this environment, so we can provide more learning opportunities. It’s a simple technology, but it does take some practice.”

Tags: College of Arts and Humanities, College of Engineering and Computing, Faculty Senate