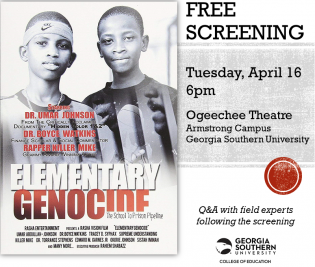 On April 16, Georgia Southern University College of Education (COE) will host a free screening of “Elementary Genocide: The School to Prison Pipeline,” a film that explores the profitability of the federal and state prison system and links to illiteracy rates of fourth and fifth graders in the country. The screening, which is free and open to the public, will begin at 6 p.m. in the Ogeechee Theatre, located in the Student Union on the Armstrong Campus in Savannah.

The documentary is the first in a series of three films directed by Atlanta-based journalist Rahiem Shabazz that explore the role education plays on self-image, family structure, financial freedom and the collective future of the African American population in America. “Elementary Genocide: The School to Prison Pipeline” focuses specifically on the social, cultural, political and personal ramifications of how the federal government allots money to each state to build prisons based on the failure rate of fourth and fifth graders.

According to Shabazz, the U.S. has the highest incarceration rate in the world. With discussions on how to lessen the prison population, “Elementary Genocide” magnifies various causes for incarceration rates and possible solutions that start with the public school system.

In an interview with TheSource.com, Shabazz stated, “In order to render a solution to this pressing problem, we must focus on the youth before they get to prison. We’ve got to start before the first day a child steps foot in a kindergarten class. Education must be of paramount concern in every household, parents need to be actively involved in PTA meetings and become school board members.”

Following the screening, the College will host a Q&A session with local professionals in the fields of education, juvenile justice and literacy.

This screening is a part of the “Education Exposed Film Series” that is taking place on the Armstrong Campus during the Spring 2019 semester. The series is being offered at no charge to students or the community as a result of a Campus Life Enrichment Committee grant written and received by COE faculty members Regina Rahimi, Ed.D., Kathleen Burke-Fabrikant, Ed.D., and David Owens, Ph.D.