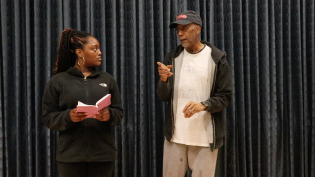 Blackman has been an active member of the theatre program and has appeared in shows such as “Crumbs from the Table of Joy,” “House of Yes” and “Amen Corner,” and he has even received national recognition from the Kennedy Center American College Theatre Festival for his performance in “An Octoroon.” This spring he took on the role of assistant director for the season closer “The Master and Margarita.”

Mical Whitaker, a professor emeritus at Georgia Southern, joined the university in 1981 as the theatre program’s first African American instructor. He directed the “The Amen Corner” in 1982 as the campus’s first all-black cast production, and the play served as a significant step in the school’s integration process. He has directed nearly 50 plays at Georgia Southern, ranging from “Othello” to classics from the August Wilson cannon such as “Joe Turner has Come and Gone.” He played King Lear in its inaugural production at the Center for Art and Theatre.

In addition to the presentation of the scholarship, guests watched a student produced documentary titled “The Making of The Amen Corner,” which looks at the rehearsal process for the anniversary production of the show this past fall. Along with the showing of the documentary, donors to the Mical Whitaker Scholarship for the study of African American Theatre were also recognized. Distinguished guests for the event include Mical Whitaker, Chas. Floyd Johnson (producer of “NCIS”) Dean Curtis Ricker and the cast and crew of “The Amen Corner” from fall 2018.

Whitaker has been an active member of the Statesboro community as an actor, director and instructor at the Averitt Center for the Arts where he was the director of the Youth Theatre program as well as appearing onstage in shows such as “Driving Miss Daisy.” He has also directed productions at the Averitt such as “A Black Nativity,” “Dream Girls” and “Jungle Book.”

Whitaker attended Howard University, but left to go to the American Academy of Dramatic Arts in New York City. There, the Metter, Georgia, native found work as a teacher at a daycare in East Harlem, which marked the beginning of his career in theater production. He then went on to produce “The Ossie Davis and Ruby Dee Story Hour” and became a founding member of the Everyman Street Theatre Festival, which is now known as the Lincoln Center Out of Doors Theatre Festival.