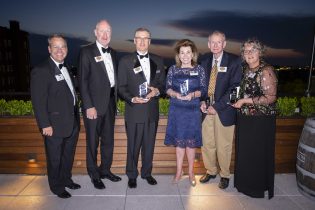 Georgia Southern University hosted its inaugural Gratitude Gala Donor Awards to recognize key donors based on their longtime support of institutional initiatives. The event was held on Saturday, May 18, at the Perry Lane Hotel in Savannah.

Vice President of Advancement Trip Addison welcomed the honorees, which included three individuals and one corporation.

“Tonight, we honor those who have truly invested in Georgia Southern and Armstrong State University,” said Addison. “The Gratitude Gala represents the coming together of donors from both institutions. We recognize those whose generosity and philanthropic spirit has helped elevate our university. Helping our students has always been their top priority.”

Addison then introduced math and biology major Katherine Barrs, a recipient of the 1906 Scholarship, which is funded by several donors and covers the cost of tuition for four years.

“We are here to celebrate the generosity of university donors and show our gratitude,” said Barrs. “I have certainly been on the receiving end of their generosity. I would like to thank them and express my appreciation for all that they do.”

Gail Reed, a native of Augusta, Georgia, was honored for her deferred charitable commitment to the Parker College of Business and the School of Accountancy. Reed, a longtime supporter of Georgia Southern, has served on the boards of several university organizations and endowed a scholarship for accounting majors in the University Honors Program. Reed owns Gail U. Reed, CPA, PC, a public accounting practice that specializes in accounting and taxation for individuals, businesses and estates.

Donald Anderson, Ed.D. (‘59), year was awarded for his ongoing support of the Athletics Department. Anderson began his career at Armstrong State College in 1966 and served as an associate professor, acting head of the Department of Education, dean for Community Services and registrar and director of Admissions. He joined the Athletic Department in 1992 as an academic advisor for student-athletes and was inducted into the Armstrong State University Athletic Hall of Fame as a Citation Award winner in 1996 for his service and philanthropy. Armstrong honored him further by awarding their top male and female student-athletes with the annual Dr. Don Anderson Scholar-Athlete Award.

Georgia Southern, Armstrong State and Georgia Power have a long history of partnership. Georgia Power has been a loyal supporter of both institutions by providing annual funds to be used in the areas of greatest needs. In addition, Georgia Power endowed the Georgia Power Chris Hobson Honorary Scholarship for outstanding chemistry students. The company recently outlined a 20-year plan focusing on the delivery of clean, safe, reliable and affordable energy. As such, they have turned their attention to funding scholarships in the area of science, technology, engineering and mathematics.

For more than 50 years, Statesboro native Betty Foy Sanders has fostered her love of learning for art with students at Georgia Southern. When her late husband, former Georgia Gov. Carl Sanders was in office, she dedicated her efforts toward the construction of several fine arts buildings within the University System of Georgia, including the Foy Fine Arts Building on Georgia Southern’s Statesboro Campus. Over the years, her generosity has continued to grow. Her gifts enabled the university to name the Art Department the Betty Foy Sanders Department of Art. She has endowed scholarships, as well as student art travel and visiting artist funds. In addition, her artwork can be seen throughout numerous buildings on campus and in the Center for Art and Theatre.