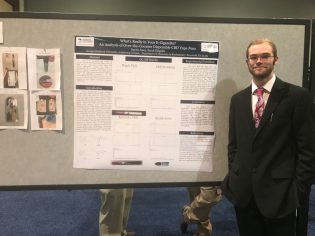 Vaping, or smoking e-cigarettes, is gaining popularity among young adults. According to a U.S. Surgeon General report, just under 14% of 18 to 24 year olds currently use e-cigarettes, and that number is increasing. Vaping devices heat a liquid to generate an aerosol, and the users inhale the vapor. The potential dangers of vaping are not yet fully understood, but Daniel Josey, a junior at Georgia Southern University, is trying to change that.

Josey heard about a vaping product called Magic Puff from friends who used it to inhale cannabidiol (CBD). Unlike other marijuana components, CBD does not produce a “high.”

The efficacy and long-term impact of CBD are still under investigation, and its use is regulated by the U.S. Food and Drug Administration. However, it can be obtained in supplements, especially in states that have legalized marijuana use.

While some users say CBD has a relaxing effect, Josey says the effects of Magic Puff described by friends were extreme: dissociation from reality, the feeling of intense intoxication, passing out and even temporary psychosis and seizures in some users.

Convinced there was something was something other than just CBD in Magic Puff, Josey set out to determine what’s really in the vaping liquid. He presented his findings at the Southeastern Regional Meeting (SERMACS) in Augusta.

“As soon as I heard of Magic Puff, I decided I wanted to classify its true active ingredient to discourage its usage,” said Josey. “The three main factors that led to my research were the rampant consumption of this product by young people, the form that the drug was available in and its misrepresentation as having a safe and natural active ingredient.”

After finding illegal drugs in the vaping devices, Josey hopes to help prompt strict regulations for all vape products and consumables sold in smoke shops and online.

“The reality of adults, teenagers and even some children unknowingly using a dangerous and mind-altering drug is absolutely horrifying,” he said.

Josey is grateful to his faculty mentors for their guidance. “I could not have done this research without the help of Dr. Sarah Zingales, who assisted me in running the GC-MS and developing a procedure and without the permission of Dr. Nathaniel Shank, my research advisor under whom I study peptide nucleic acids and who allowed me to do this project on the side,” said Josey.

After graduation, Josey’s goal is to attend graduate school and continue medicinal research. He would like to minor in neurology and focus on medicinal research as it pertains to mental health, drug policy and regulation.