Savannah Wind Symphony will honor active members of the military and veterans during its 41st annual Patriotic Concert on the Georgia Southern Armstrong Campus in Savannah. The concert will be held on June 30 at 3 p.m. in the Fine Arts Auditorium. 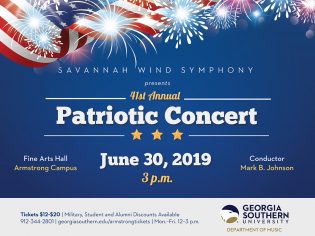 Master of ceremonies and longtime friend of Savannah Wind, William Cathcart, said his favorite part of the patriotic concert is the concluding number, “Stars and Stripes Forever,” composed by John Philip Sousa.

“It always triggers such strong emotional feelings about our great country, not the least of which is remembering, again, what a magnificent gift it truly is to be an American,” he said. “This great concert is a much-anticipated annual Savannah tradition.”

Each year the concert honors distinguished military service and finishes with a surprise appearance by a celebrity persona to conduct “Stars and Stripes Forever.” The Fort Stewart 3rd Infantry Division’s Honor Guard will present the nation’s colors to open the concert, and a senior military officer will recite the narration to the performance of “America the Beautiful.”

The performance will include other audience favorites by Irving Berlin, Henry Fillmore, Lee Greenwood and others. The 2018-2019 Chatham County Veteran of the Year, Sgt. 1st Class Nathaniel Paul Howard Jr, U.S. Army, will also be recognized.

Proceeds from the concert will support student scholarships for the Department of Music.

Savannah Wind is a community wind symphony serving the Coastal Empire and is comprised of musicians from the greater Savannah area. The role of the ensemble is to enhance the cultural climate and appreciation of music in the Coastal Empire by performing public concerts at a high, artistic level, to provide a nurturing musical environment to talented young musicians in the company of mature and accomplished musicians.