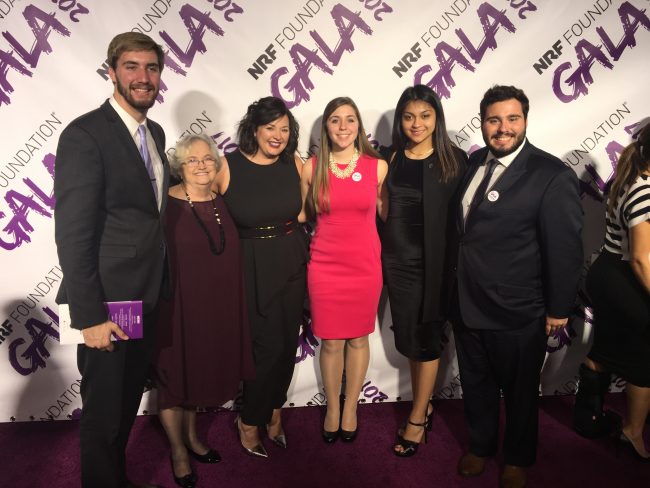 A team of Georgia Southern students received first place for the 2017 Student Challenge, a business case competition for National Retail Federation (NRF) Student Association members to demonstrate their creativity and business acumen to retail executives, sponsored by KPMG. The finalists attended the NRF Foundation GALA in New York City, where the top team was announced Jan. 15.

Jeffrey Licciardello, senior public relations major with a marketing minor, Kelsey Wertz, senior marketing and logistics major, William (Keller) Campbell, junior marketing and logistics major, and Alexis Montaño, junior marketing major with a management minor, worked together on the competition to create a 20-page pitch presentation, a mock website and a 90-second pitch video to convince STORY CEO and Founder, Rachel Shechtman, to bring their story to life through one of these themes: Travel, Sensory or Made in America. The proposal was created to provide an experience for the customer through selected merchandise, marketing approach, social media campaigns and curated events.

Kathleen Gruben, Ph.D., faculty advisor to the team, associate professor of marketing and director of the Center for Retail Studies at Georgia Southern, worked with the students every step of the way, including accompanying them to the GALA.

“The team of four was a dream team,” said Gruben. “They met every two weeks from the first week in May to the first week of classes. Then they worked together twice a week until the original submission. Throughout the process, the team took all criticism as positive and adapted accordingly. They addressed every minute criticism the judges gave. They were bound and determined they would win.”

“Being on stage was absolutely nerve wracking,” said Licciardello. “Throughout the conference, we really got along with the other teams, so I knew I would be excited no matter who won — deep down in my gut I was anxious to hear the results. The competition was tough and the other teams had concepts that had their strong points. However, when Mark Larson from KPMG said the words ‘Georgia Southern,’ I was absolutely blown away by emotions and pride.”

“This project has been our baby since May,” added Wertz. “We worked extremely hard on it, always editing, revising and bringing new ideas to the table to make it better. Standing on stage and hearing our names called was so rewarding and gave proof that all of our hard work has paid off.”

Each student will receive a $5,000 scholarship along with having had the opportunity to present in front of nearly 780 retail CEOs and senior executives, industry insiders, celebrities and students and faculty from 80 other universities.

“Being able to show all of those celebrities and retail executives that the University from Statesboro could not only compete, but win, made working tirelessly throughout summer, fall semester and Christmas Break completely worth it,” said Licciardello. “I’ve never been more proud to be an Eagle.”