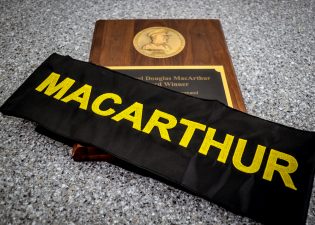 The U.S. Army Cadet Command at Fort Knox, Kentucky, has announced Georgia Southern University’s Army Reserve Officers’ Training Corps (ROTC) program is one of eight schools to receive the prestigious MacArthur Award for the 2015-2016 school year. This is the second consecutive MacArthur Award for the Eagle Battalion and is the fourth overall since 2009. The Eagle Battalion previously received the award in 2009, 2010 and 2015.

Georgia Southern University was selected as the top program from the 6th Brigade Army ROTC, which includes 39 programs from six states and Puerto Rico.

“We are truly honored to receive our fourth MacArthur Award in eight years,” he said. “It takes significant contributions from many people, many organizations to sustain this level of success. My leadership and I want to thank the Army for continuing to send high-quality officers and non-commissioned officers to serve at our ROTC program. Additionally, we want to recognize our dedicated civilian professional staff that support our program day after day to the highest degree. Moreover, we want to thank the leadership, the faculty and staff at Georgia Southern University – the Eagle Nation, and our partnership programs at Armstrong State University, Savannah State University and East Georgia State College for their assistance.”

In conjunction with the Gen. Douglas MacArthur Foundation, Cadet Command, which oversees eight Brigades comprised of 275 senior Army ROTC programs nationwide, presents the award to the top program from each of those eight Brigades.

Other MacArthur Award winners for FY16 include:

“Most importantly, I would like to highlight our cadets, who choose to become future Army officers, and undergo our significant leader development program while simultaneously performing well in their academic studies. Our cadets are the best. We are so honored!” continued Kjonnerod.

The 2016 MacArthur Award is just the latest in a long list of recent accolades for the Eagle Battalion. Georgia Southern has commissioned more Army nurses than any program nationwide, has consistently exceeded its STEM mission and is home to one of the largest non-military college ROTC programs in the country. In January, a ribbon-cutting ceremony was held for the Eagle Battalion’s new state-of-the-art facility. The Battalion’s Ranger Challenge team won the state competition in October 2016, and finished second at the Brigade level in January.