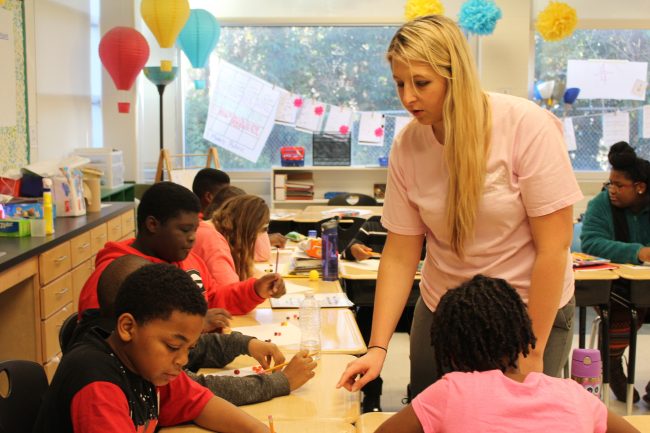 Lamb, a fifth-grade science and math teacher at Mattie Lively Elementary School (MLES) in Statesboro, was honored by GSTA at a special awards banquet on Feb. 3, at the Atlanta Evergreen Conference Resort as part of the annual GSTA Science Conference.

“Tamra Lamb is a magnificent educator whom I feel blessed to work with,” said Carolyn Vasilatos, Ed.D., principal of MLES. “Her passion for science is unparalleled. She’s only been teaching three years, and joined our faculty in July.” Lamb previously served the district for two years at Langston Chapel Elementary School.

A Double Eagle alumna, Lamb received both her bachelor’s and master’s degrees in early childhood education from Georgia Southern, where she made an equally strong impression on the faculty. She was nominated for the Georgia Science Teacher of Promise Award by one of her former professors, Katie Brkich, Ph.D., in the University’s Teaching and Learning Department.

“I have worked with many pre-service and in-service teachers in my six years at Georgia Southern University, but none whom I am as proud to have worked with as Tamra,” Brkich said in her letter of recommendation to GSTA. Brkich further wrote, “Tamra moved to a fifth-grade math and science position this year at Mattie Lively Elementary. She has thrived! She has not only transformed the way her students see and feel about science, but also how the other fifth-grade teachers on her team teach science.”

Lamb and other nominees had to complete an application process which included essay responses about how they would improve science education in their schools and school system, details about recent science lessons, and description of unique or creative lessons they have developed based on Georgia’s science standards. Nominees also had to submit three letters of recommendation. Applications were evaluated by a panel of judges using a rubric.

The GSTA’s Teacher of Promise awards recognize science teachers with one to three years of experience who demonstrate exceptional promise. The elementary, middle and high school recipients each received a $750 prize. Kia Mills of AR Johnson Health Science and Engineering Magnet School in Richmond County was GSTA’s middle school-level winner, and Elizabeth Downey of Allatoona High School in Cobb County was the high school-level winner.

“Ms. Lamb works tirelessly to have an engaging classroom environment with multiple stations and activities prepared for her students,” said Vasilatos. “She also works very closely with the science educators at Georgia Southern.”