Reefs and Rivers: The Altamaha’s connection to us 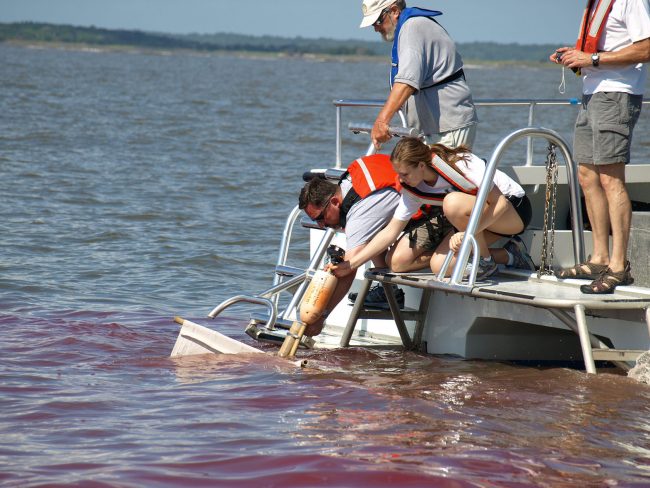 Gleason and Cohen worked with graduate students to monitor the flow of the Altamaha River to determine how substances are dispersed off the coast. To accomplish this, they released a non-toxic, fluorescent red dye to the water and also tracked offshore flow patterns with hand-made, satellite-enabled drifters. They teamed up with Gray’s Reef National Marine Sanctuary for the study, and released their first 50 gallons of dye in 2011.

Not long after, the duo applied for the Coastal Incentive Grant grant from the Georgia Department of Natural Resources to further their research, and were awarded $145,000. They continued their research and conducted dye and drifter releases again in 2014 and 2015.

From their research, the team discovered the flow offshore from the Altamaha River was far different than once predicted. Rather than traveling south, substances were dispersed in various directions based on the season. In the fall when there was less rainfall and flow out of the river was reduced, the dye and drifters traveled south as predicted. In the spring when there was more rainfall and thus more water flowing out of the Altamaha, the dye and drifters traveled many miles offshore, even into the middle of the Atlantic Ocean off Massachusetts.

The findings were crucial to understanding how the habits of residents everywhere from Atlanta to Savannah affect the kinds of substances that are distributed into oceanic waters. Gray’s Reef, for example, may experience everything from valuable nutrients to harmful pollutants from the Altamaha’s outflow.

“The nutrients that come from the river are great, but the dissolved chemicals are what can hurt these delicate ecosystems,” said Gleason. “For example, when parked cars drip oil, that oil runs off and eventually ends up in the river system. Components of that oil can be taken offshore by streams and rivers. Just because you seem a long way from these ecosystems doesn’t mean you don’t have a significant impact on them.”

Gleason encourages any students and community or school groups to contact him to learn more about this program.

“We strongly encourage groups to come learn how to make these drifters so that they can release them at other locations themselves,” said Gleason. “The more data we have, the better!”

To learn more about the research and how to build your own drifter, contact Daniel Gleason at dgleason@georgiasouthern.edu.
Georgia Southern University, a public Carnegie Doctoral/Research University founded in 1906, offers more than 125 degree programs serving 20,673 students. Through eight colleges, the University offers bachelor’s, master’s and doctoral degree programs built on more than a century of academic achievement. Georgia Southern is recognized for its student-centered and hands-on approach to education. Visit GeorgiaSouthern.edu.