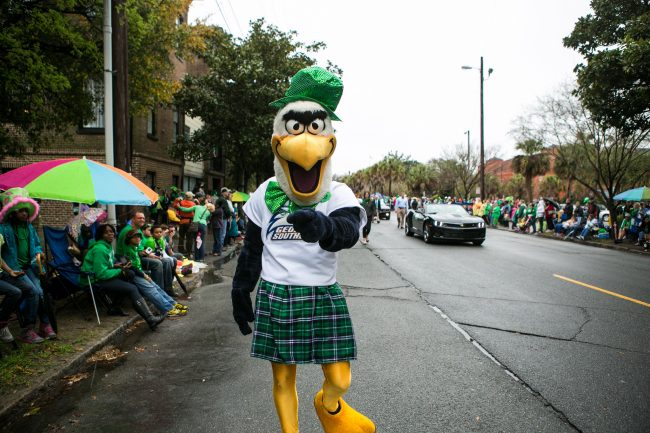 Next week, amid a sea of green, Georgia Southern will stand out as one of the Best and Brightest in the 193rd Savannah St. Patrick’s Day Parade on Friday, March 17.

As always, the University’s bald eagle mascot Freedom will accompany the float and add some extra spirit to the event.

Thor Robertson, junior accounting major, will carry on his lasting family participation in the parade by being the third generation of Robertson men to work on parade committees. To learn more about his story, click here.

The University Honor’s Program, along with the Center for Irish Research and Teaching, have been introducing Georgia Southern students to Irish culture through the Wexford-Savannah Axis for almost four years. Undergraduate and graduate students spend several weeks during the summer in Savannah and in Wexford County, Ireland, researching Savannah Irish descendants.

Sarah Ryniker, current graduate student and one of many students who have participated in the study abroad program, has created a database of Irish families who came to live in Savannah. Through her research, she has been able to uncover lasting impacts the Irish made on Savannah after immigrating to the city in the 1800s.

For more information about the CIRT visit class.GeorgiaSouthern.edu/Irish.