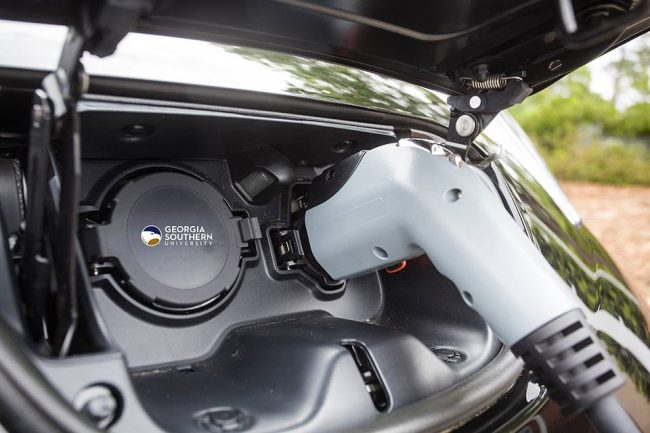 An electric vehicle charging station is one of the projects the CfS has funded in efforts to make Georgia Southern a greener campus.

Georgia Southern’s designation of honorable mention is the second highest an institution can receive in the nation. The pool of finalists included only nine four-year institutions, among them, Furman University, Duke University, two Ivy League schools and three universities from California, all widely known and supported for their commitment to sustainability. Loyola University Chicago was the winning university in the Four-Year Institution category.

Lissa Leege, Ph.D., director of the Center for Sustainability (CfS), says the honorable mention is the most impressive sustainability recognitions Georgia Southern has received yet.

She believes strong student involvement and a shared commitment to sustainability helped the University garner such a high recognition.

“All Georgia Southern students take an Environmental Science course, and the student-initiated sustainability fee supports innovative sustainability advances on campus,” Leege added. “Many students engage in environmental service-learning, having contributed more than 10,000 hours of service to the environment since 2015.”

Bottle-filling stations, bicycle parking facilities and repair stations, an electrical vehicle charging station, and tree plantings on the University’s golf course are just a few of the projects the CfS has funded in efforts to make Georgia Southern a greener campus.

“From an operations perspective, we have made excellent progress toward sustainability goals with energy reduction, water conservation and alternative transportation on our campus over the past several years,” Leege added. “We are one of the state’s top participants in Georgia Power’s Commercial Energy Efficiency Rebate Program. We irrigate with a cutting-edge reuse water system, and we are ranked No. 1 nationally for the number of passengers on our buses per mile.”

Former University President Bruce Grube signed the Climate Commitment in 2007 for Georgia Southern, paving the way for the University’s national recognition since then.

“The Climate Leadership Network continues to drive innovative solutions, which is the only way the sector and the nation will continue to remain globally competitive,” said Tim Carter, president of Second Nature. “This demonstrates to students – our next generation of leaders – what a commitment to climate action looks like.”