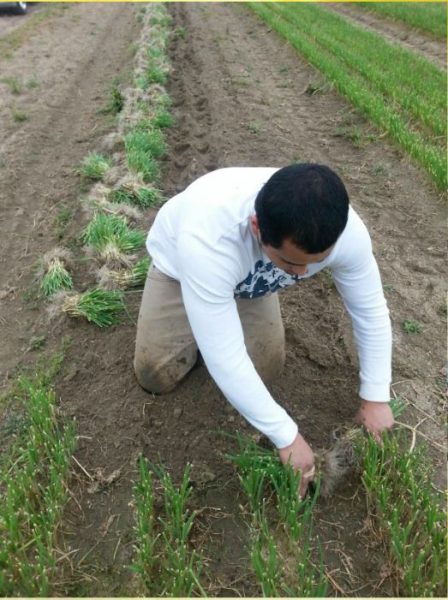 Born into a family of migrant workers, Scott Castro considered education a luxury beyond his reach. But this December, the senior accounting major will achieve a dream he once thought was impossible.

Castro’s parents and his nine siblings never completed high school. Moving homes constantly to work the seasonal crops was the only life he and his family had ever known.

But Castro was determined. Early in the morning, while kids his age were sleeping, Castro was up and working in chicken houses in Tattnall County, Georgia, before heading to school. In the afternoons, he’d help his family in the fields, then squeeze in homework and studying before a brief night’s sleep.

One day, however, an unforeseen opportunity changed his perspective forever.

He was working with a farmer who was struggling to keep up with payroll for his labor contract. Castro, who had recently taken a computer class in high school and was eager to put his newly acquired skills to the test, offered to take a look at the program. After a bit of maneuvering, Castro was able to create a system for the farmer. He didn’t imagine much in return.

When the farmer paid him for his work, Castro was taken aback.

“I thought ‘wow,’” he said. “I was just working on my hands and knees in the dirt and the rocks. I was able to make more money doing this inside than all week in the fields. This is a real skill.”

At that moment, Castro saw firsthand the difference an education could make, and the edge it would give him in the workforce. He decided to apply to Georgia Southern, with hopes of breaking the work cycle in his family.

“When I was in high school, the main reason I was able to graduate was because of my teachers,” he said. “I needed a chance to get to know my professors because I knew they’d be the ones to help push me along and keep me going. Georgia Southern’s smaller class sizes fit that description, and I said, ‘I have to go there.”

Scott Castro was the first in his family to graduate high school. He graduated from Tattnall County High School with honors.

It wasn’t until he got his acceptance letter to the University that he really felt as though his dream was attainable.

“My family was shocked,” he said. “They were surprised when I graduated high school. They feared  I’d fall into the same pattern and drop out. They don’t really understand what I’m doing, what I’m working for, or what I’m trying to do for all of us. But they’re happy for me.”

The support of his family was important, but Castro recognized the need for encouragement from others who were already living out his goals. He found a home in the College of Business and sought the advice of his finance professor, John Hatem, Ph.D., who quickly became Castro’s mentor at the University.

Castro was determined to be that mentor for other students like him. As a volunteer for the Migrant Education Program, a program that advocates for and gives advice to students from similar backgrounds, Castro actively seeks to help others graduate and fulfill their own dreams at Georgia Southern.

“What inspired me before was just to see if I could do it for my family and myself. I wanted to get us out of what I’d seen my whole life,” he said. “But now, I can see the light at the end of the tunnel. What inspires me now is helping other students who come from a similar background do the same.

“The opportunities we have in this country, and here at Georgia Southern, we can’t let those go to waste,” said Castro. “We have the ability to really change our lives.”

About the College of Business

The Georgia Southern University College of Business is one of eight colleges at the University and accredited through AACSB-International. The College offers four graduate degree programs, nine undergraduate degrees and 10 certificate programs. The College of Business is known for producing career-ready professionals, utilizing theoretical and practical knowledge, through an engaging learning environment, research and service. Visit GeorgiaSouthern.edu/business.