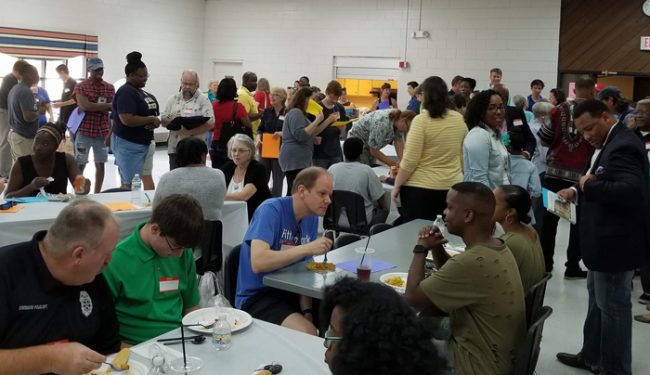 “What can we do to keep Ferguson from happening here?” That was the question asked by a diverse group of people in Statesboro and Bulloch County who came together in 2015 around the issue of relations between law enforcement and some African-American communities. Their gathering was in response to the shooting death of Michael Brown, an unarmed teenager, by a white police officer in Ferguson, Missouri, and the uprising that followed.

“We recognized that those same kinds of tensions and historical issues that existed there, in some ways existed here,” said Assistant Professor Stacy Smallwood, Ph.D., in the Jiann-Ping Hsu College of Public Health (JPHCOPH) at Georgia Southern University.

Thus, the Beloved Community (BC) was formed in Bulloch County. After two years of working within the framework of improving the relationship between local law enforcement and African-American communities, the group realized the challenges were not limited to that one objective, but were also rooted in other areas of difference that exist within the community.

Toward that goal, BC decided to hold a series of events to help bridge those gaps of difference. Hence the name of their signature series, “Bridging the Gap.” It is a program series designed to confront stereotypes and promote understanding among diverse groups in the area, and provide meaningful, structured opportunities for community members to engage in conversations around those issues.

The first in the series was held last October entitled “Town and Gown.”

“The event addressed the challenges that exist in the relationship between the University and non-university residents of the area,” said Suzanne Shurling, a member of the BC steering committee and Georgia Southern alumna.

“A lot of times when we talk about issues of difference, it’s from the perspective of our own little echo chambers. It’s a very ‘us versus them’ kind of thing. We want to help push through and disrupt that, and have opportunities to bring people together so that they can learn more about diverse communities, diverse backgrounds and diverse issues, and how we can work together to help improve the climate of Statesboro and Bulloch County,” said Smallwood.

Smallwood and other BC members emphasize that the organization is a grassroots group and a nonpartisan, apolitical group.

“The way I like to describe it is that we want to help fix the community from within the community. You know how sometimes people go to different places and try to fix the homeless problem, for example. They are outsiders. They are coming in helicopter-style trying to fix someone else’s problems. We would rather do it from within,” said Shurling.

The next program in the “Bridging the Gap” series is “Let’s Talk About Class!” which focuses on class, wealth and socioeconomic status. The event will be held Friday, Feb. 23 from 6:30 to 8:30 p.m., and Saturday, Feb. 24 from 10 a.m. to 12 p.m. in the Russell Union, Room 2080, on the Georgia Southern University Statesboro Campus. More information can be found here.

The event will include an exercise called a “privilege walk.” This activity requires audience members to examine the ways in which society bestows privilege on some individuals over others.

“A facilitator would say, ‘If you have a college education, take a step forward. If you’ve never had to worry about putting food on your table, take a step forward.’ And various other ways that people have privilege. It’s going to be a good visual I think, because people don’t really understand the word privilege and how it applies to them,” said Shurling.

BC is community based with strong ties to the University. New Statesboro Mayor Jonathan McCollar is part of BC, and his wife, Adrianne (supervisor of facility services at Georgia Southern), is a member of the BC steering committee. Other steering committee members include Smallwood, Shurling, the Rev. Jane Page, pastor of the Universalist Unitarian Fellowship and former chair of the Department of Curriculum, Foundations and Reading at Georgia Southern, Katherine Kaufmann, graduate assistant with JPHCOPH, retired educator Janice Cawthorn and writer Dixie Aubrey.

When asked if he has seen any impact on Bulloch County since the initiative was started, Smallwood said, “That’s a hard question to answer. But we can say there have been some meaningful strides made. We’re noticing that people are engaging in more critical conversations around issues that the community faces. And now, we have new relationships with law enforcement. We know it takes a lot of effort and time, and a lot of different people involved for any community change to occur. We are just trying to offer our little piece of what we think could help achieve Dr. King’s dream of the beloved community.”