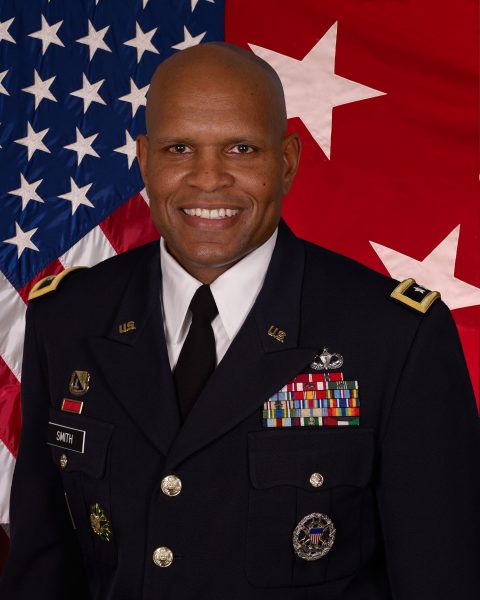 Georgia Southern College of Business alumnus Lt. Gen. Leslie C. Smith (‘85) was one of 29 people recognized as a member of the 2018 Influential Leaders class by the the Association to Advance Collegiate Schools of Business (AACSB) International, the world’s largest business education network.

Smith, who was recently promoted to a three-star lieutenant general in the U.S. Army, was recognized during the AACSB International 2018 Deans Conference in Las Vegas, Nevada, in early February. Those recognized were considered business pioneers from 13 industry sectors and have careers that address today’s most pressing social, economic, environmental and educational challenges.

AACSB International celebrated the positive impact business school graduates are making in communities around the globe as part of the 2018 Influential Leaders Challenge. As an annual initiative, the challenge honors notable alumni from accredited schools whose inspiring work serves as a model for the next generation of business leaders.

“Each honoree from the 2018 class of influential leaders reflects the mindset, knowledge and passion that impactful business leaders must embody to impart positive change in today’s society,” said Thomas R. Robinson, president and CEO of AACSB. “We would like to thank Lt. Gen. Smith for demonstrating the true excellence and leadership we wish to see in the world, and we congratulate Georgia Southern’s College of Business for their role in helping to mold a new generation of global business leaders dedicated to driving impact that results in global prosperity.”

After graduating with an accounting degree in 1985, Smith entered the U.S. Army as a chemical officer. In 2001, he assumed command of the 83rd Chemical Battalion, where elements of the Battalion deployed in support of Operation Enduring Freedom. Following command, he served on the U.S. Army staff in the G-8 as the deputy division chief and as chief of the NBC Branch for the Full Dimensional Protection Division.

In 2005, Smith assumed command of the 3rd Chemical Brigade at Fort Leonard Wood and later served as the G-3, 20th Support Command, and from 2008 to 2010, the 25th chief of Chemical and Commandant of the U.S. Army Chemical, Biological, Radiological and Nuclear School. In 2010, he became the fourth commander of the U.S. Army 20th Support Command (CBRNE – Chemical, Biological, Radiological, Nuclear and High-Yield Explosives).

Prior to his current position in the U.S. Army, Smith was commanding general of the U.S. Army Maneuver Support Center of Excellence at Fort Leonard Wood. In 2017, he was named the Georgia Southern University College of Business Alumnus of the Year. Smith has received 22 medals, awards and badges throughout his years of service to our country. He has an impressive record having earned the expert parachutists’ badge, the Distinguished Service Cross, the Bronze Star with an Oak Leaf cluster and the U.S. Army Commendation Medal with Oak Leaf cluster.

Smith currently serves as inspector general to the Office of the Secretary of the U.S. Army.

As the world’s largest business education alliance, AACSB International —The Association to Advance Collegiate Schools of Business (AACSB) l— connects educators, students and business to achieve a common goal: to create the next generation of great leaders. Synonymous with the highest standards of excellence since 1916, AACSB provides quality assurance, business education intelligence and professional development services to almost 1,600 member organizations and more than 795 accredited business schools worldwide. With its global headquarters in Tampa, Florida; Europe, Middle East, and Africa headquarters in Amsterdam, the Netherlands; and Asia Pacific headquarters in Singapore, AACSB’s mission is to foster engagement, accelerate innovation, and amplify impact in business education. For more information, visit aacsb.edu.

The Georgia Southern University College of Business is one of eight colleges at the University and accredited through AACSB-International. The College offers four graduate degree programs, nine undergraduate degrees and ten certificate programs. The College of Business is known for producing career-ready professionals, utilizing theoretical and practical knowledge, through an engaging learning environment, research and service.