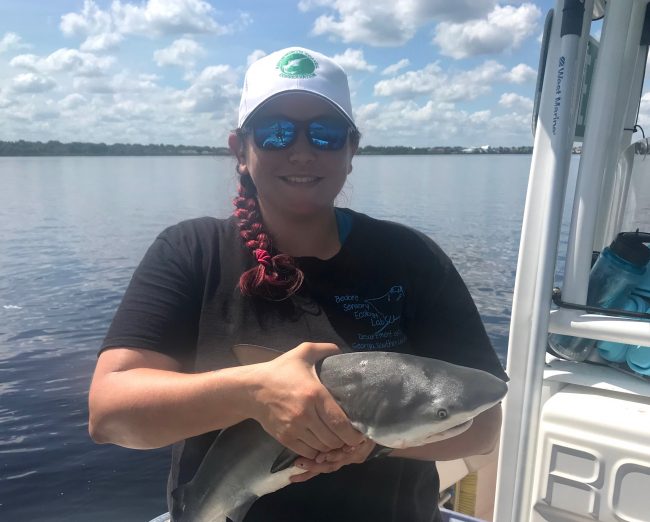 Bedore, an associate professor in the Department of Biology, has a passion for learning all she can about the ocean’s top predators, as well as a passion for researching stingrays. She’s done extensive studies and works regularly with OCEARCH, a nonprofit organization that tags sharks to conduct research off the East Coast.

Specifically, Bedore studies the eyes of sharks and stingrays to see how they are viewing their prey and other predators. When she is out on board with the OCEARCH crew, she helps where she can, but is most interested in getting photographs of shark eyes. 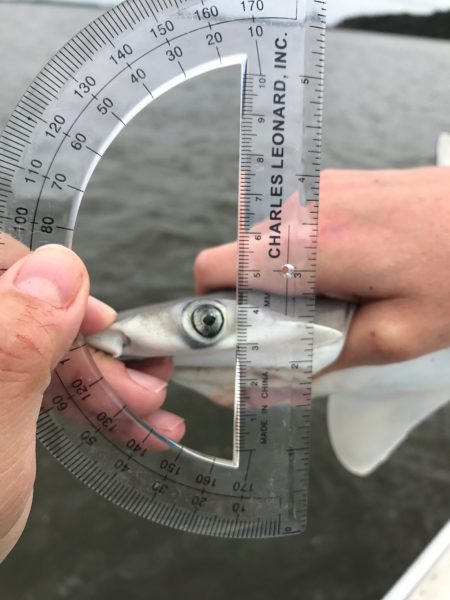 “We get a bunch of eye measurements and bring that back to the lab and match it up with museum specimens,” she said. “Then we do some modeling where we trace the path of light through the eye. This tells us how far away a shark can see a prey item or another shark under different environmental conditions.”

Additionally, the OCEARCH crew and Bedore take blood samples to understand shark physiology and their stress levels. They also take skin samples to look at bacteria and antibiotics that are on the skin and remove parasites and look at the overall health of the shark.

She has also been working with shrimpers off the coast of Georgia to understand how sharks and stingrays interact with shrimp boat equipment.

“We are interested in how sharks and stingrays act with the trawl gear,” she said. “Whenever a shrimp boat is actively fishing, they have nets they put down on the bottom of the ocean and tow them along and basically catch whatever is in the path of the net, which is what we call bycatch.”

Bycatch, or unwanted fish and other marine creatures caught by the giant shrimp nets, is essentially a big ball of bait that sharks follow and bite at, which can cause a lot of damage to gear, she said. Bedore is working with scientists, fisherman and conservationists to develop a deterrent that will keep sharks from damaging gear.

But more importantly, Bedore’s research focuses on what happens when sharks and stingrays are caught with the bycatch.

“Part of what we’re doing is trying to understand how many sharks and stingrays are being caught by shrimpers,” she said. “What areas along the coast are they being caught, are they catching newborns or adults and how is that going to be significant for the environment?”

Bedore said this isn’t just happening off the coast of Georgia, but across the U.S., which she finds fascinating. She hopes the studies and conservation efforts can help scientists gain a better understanding of sharks.

“This is such an early project so we’re just trying to get an overall picture of what’s happening,” she said. “What we’ve figured out so far is that most of the species (of shark) caught as bycatch are some of the most reproductively successful species, and since they are putting out a lot of young, the impact on shark populations is probably pretty minimal.”

What is more interesting to Bedore is the effect trawl nets have on stingrays. Most shrimp trawl nets have turtle excluder devices, which helps prevent large sharks, large turtles and large fish from becoming trapped in the nets, she noted.

“What’s kind of interesting is that stingrays, because they’re flat, can turn sideways, so the turtle excluder devices don’t seem to work for the stingrays,” she said. “But stingrays tend to be pretty prolific, so they’re probably similar to some of the sharks we’re seeing that are caught in the net and there may be minimal impact.”

However, Bedore said some species of stingrays may only have one or two young per year, so scientists don’t know how these species populations may be affected long-term.

“Stingrays can also have some trauma from going through the net; they’re potentially towed for hours, and they have stingers that can get caught in the webbing so it can damage their tails,” she said.

As Bedore continues her research and works with teams like OCEARCH and local shrimpers, there is one common thread she finds most fascinating of all.

“The most interesting thing I’ve learned is how incredible it is to see people from so many different areas of life coming together for a common goal,” she said. “We get used to working with other scientists but we don’t often have the opportunity to work with these fishing groups and production teams. That’s a really cool learning experience.”