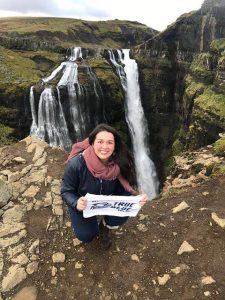 Amber Monroe, a 2016 Georgia Southern University graduate who earned a B.S. in biology, settled into the dramatic landscapes of Iceland earlier this year to pursue graduate research and fulfill a childhood dream.

“As a kid, I was fascinated with Norse mythology and always wanted to come to Iceland,” said Monroe. After graduation she went on to work as a high school teacher and took her first trip to the Land of Fire and Ice in April 2017. “I fell in love with it and knew it was where I wanted to be for this next chapter of my life.”

The following year she applied to the master’s program at Hólar University College in northern Iceland.  Accepted into the program, Monroe began her graduate studies in May and is currently conducting research in the field of aquaculture. Her experiments are designed to better understand the growth and metabolism of lumpfish, economically important coldwater fish that help control sea lice (a parasitic crustacean) in aquaculture facilities where fish are raised.

“Lumpfish are actually a new species to me, and I hadn’t heard of them until I started applying for universities in Iceland,” she said. “Hólar has conducted research with lumpfish in the past, so the experiment I am working on is a continuation of that research.”

Monroe says there aren’t many differences between her new home campus and Georgia Southern’s Statesboro campus, but one of the biggest is class size.

“The campus is much smaller than GSU’s campus,” she said. “But I like how at both universities you can get to know people on a personal level and everyone is willing to help each other.”

Although Monroe is attempting to learn Icelandic, her program at Hólar is internationally diverse.

“It’s fairly normal to be sitting at the lunch table and hear conversations in English, Icelandic, French, Dutch and German,” said Monroe.

Attending a small college on a sparsely populated island means that life is “more laid back” than in the U.S., and Monroe finds that socializing with fellow students to stay active is important.

“One big difference is the importance of heated geothermal pools in Iceland,” she said. “They are big meeting places where people go to hang out and relax, and we usually go a few times a week.”

As a Georgia native Monroe says that the snow flurries aren’t what’s making her nervous about the approaching winter season.

“I think winter in Hólar will be a substantial change from Georgia,” she noted. “I am less nervous about the snow and more so about the darkness. During the winter, we will only get a few hours of sunlight a day. However, my friends here have offered advice on what to do during the winter. Social clubs that ski, knit or home brew are vital to getting through the winter.”

While Monroe’s time in Iceland will ultimately help her complete professional goals, she finds the cross-cultural experience to be just as important. “There are opportunities across the globe,” she noted. “Students should explore their options and see what is out there.”