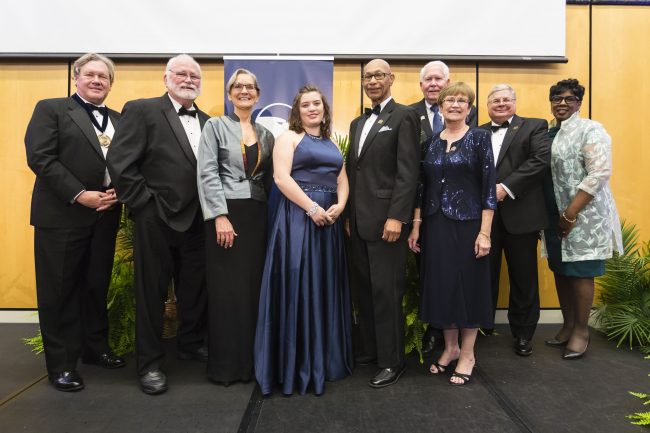 The 2019 Georgia Southern University Alumni Association Awards were presented Saturday, April 13 to eight distinguished alumni at the Nessmith-Lane Center on the Statesboro Campus.

Presented to the alumnus, who through volunteerism and/or philanthropy, has made the greatest contribution to the advancement of the University. Peace is the Georgia Cancer Coalition Distinguished Cancer Scholar, Senior Research Scientist and Professor of Biostatistics in the Jiann-Ping Hsu College of Public Health at Georgia Southern. He created an endowment to establish the Jiann-Ping Hsu College of Public Health, the first college of public health in the University System of Georgia. He is the architect of the Master in Public Health program in Biostatistics and Founding Director of the Karl E. Peace Center for Biostatistics in the college. He is from Newton, Georgia and lives in Statesboro.

Presented to the alumnus who has shown remarkable achievements in local, regional, national and international service. Johnson, from Savannah, served eight years as the 64th mayor of the city of Savannah. While mayor, Johnson provided leadership for the creation of Step Up Savannah, Inc., a poverty reduction initiative, and Healthy Savannah, an initiative that promotes healthy lifestyles. Johnson has devoted his professional career to making conditions better for low-wealth families in Savannah and the south.

Presented to the alumnus who has made the greatest achievement in his or her career. Levett, a Savannah native and proud product of its public schools, was appointed as superintendent of Savannah Chatham County Public Schools in 2017, having previously served as deputy superintendent and chief academic officer. Having completed undergraduate work at Armstrong and three graduate degrees at Georgia Southern, Levett earned a doctorate in educational administration at the University of Georgia. She has completed leadership development programs at Harvard, Yale, Vanderbilt, University of Delaware, University of California San Diego and the University of Tennessee at Chattanooga.

Presented to a couple who are both alumni and who, together or separately, have supported the University through philanthropy, service or professional work. Spence and Sheila Hoynes of Savannah have been married for almost 47 years.  Although they did not know each other while they were at Armstrong and Georgia Southern College respectively, they met in Savannah and their first date was the last basketball game that the two colleges played against each other in 1971. The continued growth and development of the University are extremely important to the Hoynes Family. They are annual Foundation donors contributing to both Georgia Southern Statesboro and Georgia Southern Armstrong programs, are members of the Marvin Pittman Society, 1906 Society and the Legacy Society, having endowed scholarships in both of their wills. They are indeed “Georgia Southern Loyal.”

Presented to an Armstrong alumnus who best exemplifies the University’s core values as expressed through integrity, civility, kindness, collaboration and a commitment to lifelong learning, wellness and social responsibility. Ernst, a partner at Hunter Maclean in Savannah, is a nationally recognized environmental attorney who has represented clients on wetland issues and coastal development matters related to various facets of the federal Clean Water Act, Georgia’s Marshlands Protection Act and Shore Protection Act for more than 30 years.

Presented to a Georgia Southern alumnus who best exemplifies the University’s core values as expressed through integrity, civility, kindness, collaboration and a commitment to lifelong learning, wellness and social responsibility. Nagy, of Gainesville, Florida, retired in July after a 33-year museum career. For the last 16 years she was director of the University of Florida’s Harn Museum of Art. Previously she was associate director of education and curator of African art at the North Carolina Museum of Art in Raleigh and instructor at the Cleveland Museum of Art. She held adjunct faculty positions at the University of Florida, the University of North Carolina at Chapel Hill and Case Western Reserve University. Nagy graduated summa cum laude from Georgia Southern in 1975.

Presented to the alumnus who best represents excellence in their career field, service to their alma mater and service to the community. Childre is a third generation auto dealer. In 1980, at the age of 25, he founded Childre Ford, Inc., in Sandersville, Georgia. Childre Ford has won numerous awards including Ford Motor Company’s prestigious Chairman’s Award for being one of their top performing dealerships. While continuing in the Ford dealership, Jimmy served for 15 years as a board member, chair and CEO of Washington County Regional Medical Center. At Georgia Southern, Childre is Chair Emeritus of the Georgia Southern Foundation, having served 28 years including two terms as chair. Childre also served on the Parker College of Business Advisory Board, the Alumni Association Board, the Center for Entrepreneurial Learning and Leadership, and the Athletic Foundation Board.

The Outstanding Senior Award is presented to graduating seniors who have completed all of their coursework at the University with the highest overall GPA. Hanselman is a music education major with a choral emphasis and a minor in political science. Born and raised in Marietta, Georgia. After graduation, she plans to teach elementary general music or high school choir. She also hopes to eventually get certified to teach American government to further her ability to teach and to help the next generations to come.