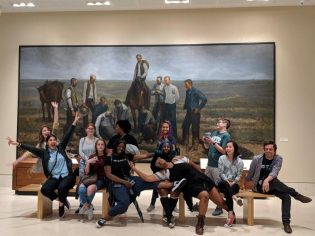 In April, Betty Foy Sanders supported a student field trip to the Booth Museum in Cartersville and the High Museum in Atlanta.

In April, BFSDoArt students visited the Booth Museum in Cartersville, Georgia, as well as the High Museum in Atlanta.

“This trip will provide an excellent research opportunity for advanced students in the art program at Georgia Southern University to gain exposure to cutting edge contemporary artwork as well as historically important American artwork and artifacts,” said Jon Witzky.

Sanders is supporting the field trip in memory of the late Roxie Remley, one of the Art Department’s founders and fellow long-time advocate for the visual arts in Statesboro. 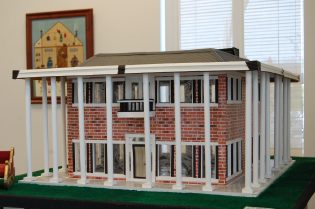 The new addition to the Folk Art Collection is a three-dimensional model of the Governor’s Mansion, an important building to the state of Georgia with strong ties to Mrs. Sanders.

“One interesting thing about this piece is the personal connection to Mrs. Sanders. She was the person charged with seeing that this building was built and she took a great deal of time to make it something that would meet the needs of future residents,” said Betty Foy Sanders Department of Art (BFSDoArt) Chair Jeff P. Garland.

During Carl Sanders’s term as governor of Georgia in the early 1960s, the Sanderses were tasked with building a new governor’s mansion. Mrs. Sanders oversaw the project. The three-story, Greek-revival style, structure was constructed using Virginia pink-toned brick and 30 Doric columns. The mansion’s design was somewhat reminiscent in style to the first Governor’s Mansion built in Milledgeville in the late 1830s.

The model was created by an inmate who participated in the HeartBound Ministries Project Art initiative, a program that provides incarcerated Georgians with an outlet for their creativity and sometimes hidden talents. Each year HeartBound hosts an exhibition of work in Atlanta. Just as Mrs. Sanders felt it was important to connect with all Georgia residents through outreach and service programming, her daughter Betty Botts continues this legacy with her connection to HeartBound.