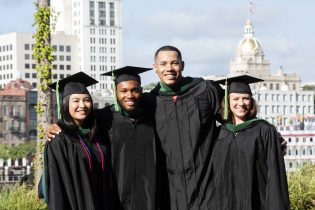 After welcoming the spirited crowd of students and their family and friends, he expressed his appreciation for Eagle Nation students, faculty and staff.

He also applauded university alumni who proudly support the university, its history and the impact it has on the region, and congratulated the students on all of their hard work. Following, he welcomed fashion executive, self-made multimillionaire and ABC “Shark Tank” star Daymond John as the commencement speaker.

John’s success story of sacrifice, hard work and perseverance as he turned a $40 budget into FUBU, a $6 billion fashion brand, inspired students. He is also a New York Times best-selling author, branding guru and highly sought-after motivational speaker. In 2013, John was appointed as a Presidential Ambassador for Global Entrepreneurship by former President Barack Obama.

In addition to the university-wide ceremony, the Waters College of Health Professions, College of Behavioral and Social Sciences, College of Education, Allen E. Paulson College of Engineering and Computing, Jiann-Ping Hsu College of Public Health, College of Science and Mathematics, Parker College of Business and College of Arts and Humanities held their own ceremonies where every graduate from that college was recognized individually. These ceremonies were led by college deans and allowed greater involvement from the faculty, enabling the university to focus on individual student academic achievement. The ceremonies heightened the academic distinction students have achieved and allowed for recognitions such as doctoral degree hooding and honors designations.

In a special tribute, the university also awarded posthumous degrees to the families of Caitlyn Baggett, Morgan Bass, Emily Clark, Abbie DeLoach and Catherine “McKay” Pittman, the School of Nursing students who were tragically killed in 2015. 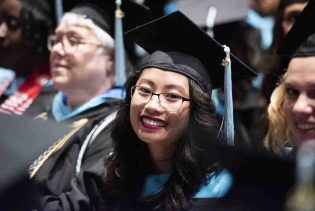 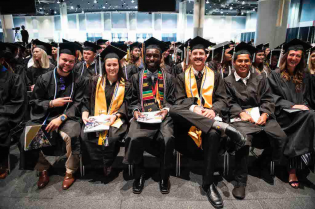