Hoops with Heroes brings local law enforcement and youth together 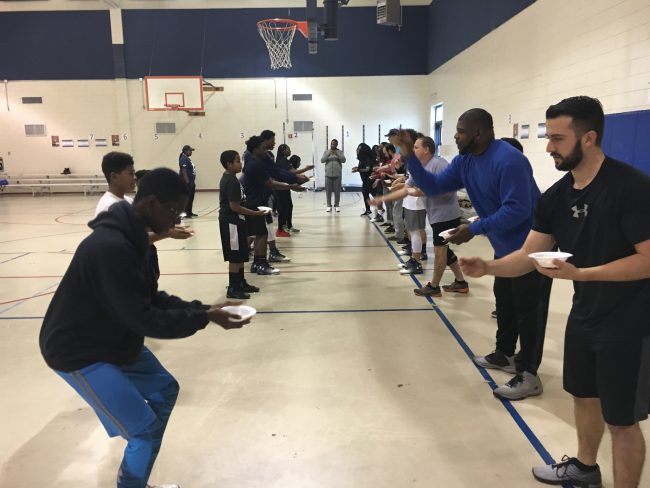 Approximately 17 local children spent the morning at the event which is aimed at bringing together middle school students and local law enforcement from the Bulloch County Sheriff’s Office, Georgia Southern Police Department and Georgia State Patrol Post #45, by using basketball as a bridge to build positive relationships and improve communication from an early age.

Prior to the event, research was conducted on positive youth development and sport for peace and development. The group identified the core values they wanted to teach and created a daily schedule that integrated these values with basketball.

“The activities were designed for the kids to learn about character, awareness and perseverance, which was put into an acronym: ‘C.A.P.,’” said Butler. “We wanted the activities to be both competitive and fun.”

There were a total of six different activities offered. Three were geared toward basketball, and three were non-basketball related. Participants took part in simple drills, such as passing and dribbling, and competed in a human hula hoop contest, marshmallow toss and blindfolded listening activity.

Georgia Southern Athletics provided all children participants with free tickets to both the men’s and women’s basketball games that were played the weekend of the ‘Hoops with Heroes’ event. Local restaurant, 40 East Grill, donated a catered lunch for the event allowing participants the opportunity to socialize afterwards.

“Bullock and Butler did an all-around fantastic job,” stated Wilson. “The feedback from the kids, the officers and the volunteers was wonderful, and several officers have already asked when the event will be held again.”