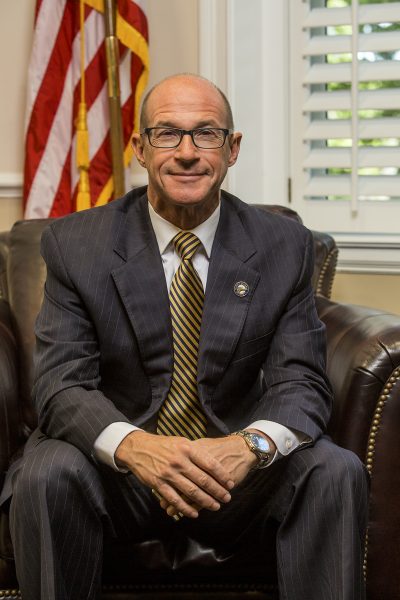 When Georgia Southern President Jaimie Hebert, Ph.D., attended last year’s annual Watermelon Cutting in July, he didn’t expect it to resonate with him as much as it did.

Hebert said a mentor and friend of his in Texas told him there would be a moment in his first year where he would “absolutely fall head over heels in love” with his university. But Hebert wasn’t sold.

Much to his surprise, Hebert says it was in that moment, as he stood before faculty, staff and students slicing watermelon, he knew Georgia Southern was a place he loved.

“It was one family,” he recalled. “There was absolutely no division amongst staff, and deans, and students. And it kind of connected all the pieces for me that day. Some of my fondest memories are on my grandparents’ farm, and that’s the kind of things we did — having a cold watermelon was a family event. So it brought home memories of my childhood, and it brought home what this University was about.”

The moment he fell for Georgia Southern came shortly after Hebert became the president of the University on July 1. Reflecting on his first year, and first-ever, role as a university President, he described the experience as “extraordinary.”

“I knew it was a chance of a lifetime when I took this job, and within this one year, it became the experience of a lifetime,” he said. “That’s largely due to the amazing relationships I’ve established, and the people — the faculty, the staff and especially the students — who I’ve grown to know. It’s really been one of the best years of my career.”

An extraordinary year didn’t come without its challenges, though. Hebert said balancing his new role, learning about every facet of the University and learning about himself were all expected, and welcomed, challenges.

“I don’t think I have ever been in a situation before that has led me to develop as a person or as a leader like the challenge of being the president of such a dynamic institution,” said Hebert. “This year was challenging, but I also learned a great deal about myself.”

His first year also brought new and lifelong friendships, and an appreciation for his new community in Statesboro.

“Statesboro feels like small town America, and it’s deliberate,” he said. “People want to live in a friendly community, and I think one of the most wonderful things about this city and our campus is that you can walk up to a complete stranger and feel like they’re one of your friends. That just doesn’t happen everywhere.”

As he enters his second year as president, and as the University’s consolidation with Armstrong State University is underway, Hebert says he wants to spend more time working with students in various areas of campus, and continue to build relationships with faculty and staff who are the heart of the University, all of whom have inspired him since he first came to Georgia Southern.

Another priority for Hebert as the consolidation progresses is getting everyone excited about the multitude of possibilities this new university will bring to the people who live, work and learn here.

“This consolidation has been tough on an emotional level, and it’s been tough on the complexity of the process itself,” said Hebert. “So now, I want to get everyone focused on positive side of this consolidation, and thinking forward about vision, because that’s where the fun part is. That’s why we’re all in higher education.”

Hebert says he wants the new Georgia Southern to be focused on growth, economic impact, social impact and giving our students a more competitive edge.

“What we have done by going through this consolidation is provided ourselves, all of us on all three of our campuses now, with more opportunities to grow enrollment, providing access to more students in the state of Georgia,” Hebert said. “We are going to be able to grow the breadth of our curriculum and be responsive to a workforce like we never could have been in Statesboro or they never could have been in Savannah.”

In conversations with folks on the three campuses, Hebert said the visions of the two universities “are not very different.”

“Regardless of how they approach it, on our campuses, the primary concern is providing hope for our students,” he said. “Hope for a better future, hope for a brighter future, and hope to chase their professions, their careers and their dreams. Bringing that common goal together with all of the opportunities this consolidation brings, I look forward to that. Because when the passion of our faculty and staff starts bubbling up over this coming year, it’s going to be just be so much fun to be a part of this.

“We are going to be able to do things that neither one of these institutions would have ever been able to do on its own.”