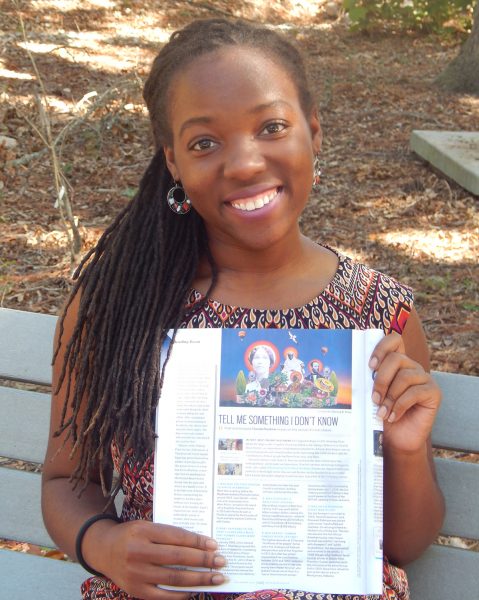 Nancey B. Price’s artwork is featured in the November issue of O Magazine.

When Georgia Southern graduate student and staff member Nancey Price stepped off the plane and checked her phone after a week of being disconnected from internet access, the last thing she thought she’d see was a personal message from the freelance art director of O Magazine.

In fact, she never imagined she would come home to a series of messages asking her to commission an original piece for the magazine. Paul Naughton, the art director, found Price’s collage artwork on Etsy and reached out to her while she was volunteering overseas with the organization she founded, the Malawi Girl Project. Naughton sent messages to Price’s Etsy shop, Facebook page and even reached out to her siblings to get in touch with her.

“When I read that the people at O wanted me to contribute an original piece, I immediately thought it was a scam,” said Price. “The thought of having my art associated with someone as influential as Oprah Winfrey was too good to be true, so I originally didn’t believe it. However, after confirming its legitimacy, I got really excited.”

Price was not only challenged to create an original piece, but she also had the challenge of tying in her artwork with a book review for Henry Louis Gates Jr.’s “100 Amazing Facts About the Negro.”

Price stepped up to this challenge and for two weeks spent countless hours emailing editors, running to and from a print shop and cutting out dozens of images to find the perfect arrangements.

“I had to tailor [the collage] to the parameters of that review, which was something I had never done before. It was definitely the hardest piece that I’ve worked on up to this point,” she said.

“Instead of creating a piece that I, alone, thought would go great with the review, I had to make a piece that included all of the historical figures featured in the write-up. That meant finding a way to make seemingly unconnected individuals like General Sherman, Mansa Musa, Harriet Tubman, Anne Spencer and the Sambo caricature, come together in a cohesive work of art.”

Finally, she created a piece she describes as a “whimsical family portrait,” that made it into the November issue.

This opportunity has opened many doors for Price, and she is eager to keep moving forward as an artist. The Girard, Georgia, native has been making artwork since she was a young girl and began leisurely making collages just last year, but it wasn’t until this opportunity that she considered her skill a future career.

“Collaging has always been a hobby and a means of relaxation for me, and because I still consider myself a novice with no formal training, I never expected this hobby to garner such as massive audience,” said Price. “However, my art being featured in O has me reconsidering just how important collaging will be in my life moving forward.”

Price plans to graduate in the fall of 2018 with a Master’s in Public Administration with a concentration in nonprofit management which she will use to continue her efforts with her Malawi Girl Project.

“Being commissioned by the magazine has prompted me to finally create a website to centralize everything that I do as far as writing, collaging and my humanitarian work. Oprah has exposed me to a massive audience, so I hope to expose that audience to everything that I do,” she said.