Grayson Usrey never anticipated his passion for boating and bowfishing would be anything more than recreational. But when the call came for hurricane relief in Texas, Usrey didn’t hesitate to put his skills and equipment to use in an unexpected way.

When Usrey stumbled upon a Facebook post from Bowfishing Association of America calling for volunteers for hurricane relief in the aftermath of Hurricane Harvey, he called his friend, pulled together some funds, and they made plans to take the 16-hour trip halfway across the country. Usrey called his parents, spoke with his professors, and packed his bags (and his friend’s airboat) for the trek. 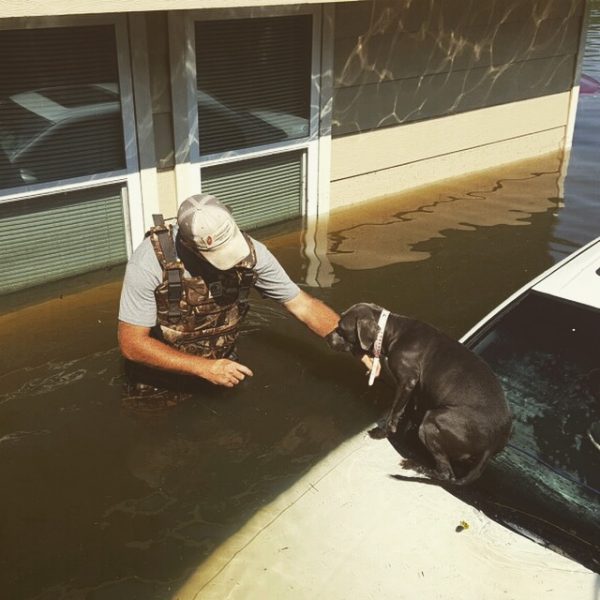 Once they arrived in Texas, Usrey and his friend met up with members of the Cajun Navy, a grassroots group of volunteers from Louisiana, founded after the devastation of Hurricane Katrina. With their own supplies and service-driven hearts, the volunteers swept the area for days conducting search and rescue missions and checking on homes and businesses.

“We were literally driving boats down Interstate 10,” said Usrey. “We went through neighborhoods and just saw tops of houses.”

The long days and tough calls never stopped Usrey from feeling compelled to help. Despite the working conditions, Usrey and his friend forged ahead, sleeping in local churches in different locations night after night. Each day, with nothing more than their basic boating essentials (life jackets, bottled water, etc.), Usrey made his way through towns and neighborhoods searching for anyone…or anything in need of help.

On the way back from a long day of searching, Usrey heard noises in the distance. Amid the rising water and hectic winds, the sound was masked and faint. But Usrey wasn’t going to take a chance on leaving something behind. He swept an entire neighborhood searching for the sound. As the boat drew closer, he saw what appeared to be an animal on top of a car.

He pulled up his waders and swam to find a soaked, shivering dog cabled to the wheel of a vehicle, climbing to avoid the waters underneath her. Usrey rushed over to calm the dog as he freed her from the car.

Late one night, in the downpour of freezing rain, Usrey came across a mother with two young children fighting to stay safe near their vehicle. The current was getting faster, and Usrey could tell the mother was terrified of her children being swept away. Once again, with nothing more than determination and a good boat, Usrey pulled the family to safety.

Usrey returned home from Texas with a much deeper understanding of service and a true appreciation for his fellow volunteers.

“You never know when it could be you,” he said. “We all had the means to do it, so I felt the need to help my country and community out…If I was in that situation I’d want help too. Everything came out of pocket, but knowing that we got people out and possibly saved their lives made it worth it. This was something bigger than myself.”

Now Usrey, currently an undeclared major, is changing the way he looks at his academic career.

“This trip really opened up my eyes into future careers,” he said. “I realized how much I enjoy serving my community and providing aid and services. Now I’m looking at going somewhere along the criminal investigations route, ending up as a detective or in forensic analysis.”

He values the life lessons and experience as a whole, but the true highlight from the trip for Usrey was an unexpected souvenir, one he is thankful for every day.

The Blue Lacy (incidentally the state dog of Texas) which Usrey rescued that dreary day in Texas, is now his newest companion. Milli, as he calls her, is a constant reminder of the good of people. 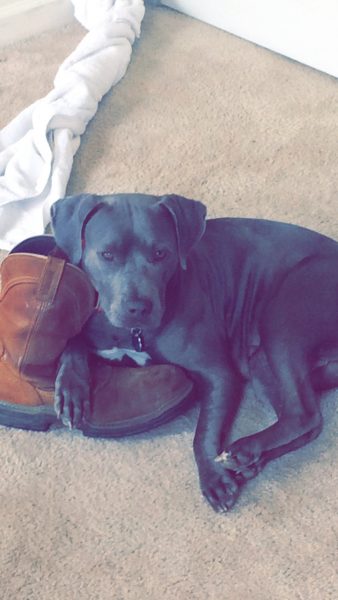 “For me personally the takeaway is that despite the divide the media portrays, I saw people come together for the common good. Everybody was helping out, no matter race, gender or creed. It was just good people doing good stuff, and Milli reminds me of that every day,” said Usrey.