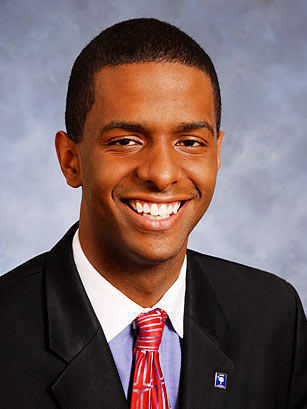 Civil rights activist, attorney and political commentator Bakari Sellers has been named the Georgia Southern University annual MLK Celebration speaker and will present on Wednesday, Jan. 24, at 7 p.m. in the Performing Arts Center at 847 Plant Drive in Statesboro. The live presentation will be simulcast at the Georgia Southern Armstrong Campus in Savannah.

April 2018 will mark 50 years since King’s assassination, and as such, will be an important theme in Sellers’s presentation. Sellers will present on activism in reflection of King’s legacy.

Sellers made history in 2006 when, at the age of 22, he defeated a 26-year incumbent state representative in South Carolina. His win made him the youngest member of the state’s legislature and the youngest African-American elected official in the entire nation.

He won the 2014 Democratic nomination for Lt. Governor in South Carolina, and served on former President Barack Obama’s South Carolina steering committee during the 2008 election. Sellers has received numerous accolades including being named TIME Magazine’s “40 Under 40” in 2010 and being ranked in “The Root 100” list of the nation’s most influential African-Americans in 2014.

Sellers has served as a featured speaker at events for the National Education Association, College Democrats of America National Convention, NAACP, the 2008 Democratic National Convention, and he delivered the opening keynote address to the American Israel Public Affairs Committee Policy Conference in Washington, D.C., in 2007.

Sellers practices law with the Strom Law Firm LLC in Columbia, South Carolina, and is a CNN contributor. He is married to Ellen Rucker.

Each year, Georgia Southern’s MLK Celebration provides an opportunity for the campus and community to gather and celebrate the life and legacy of the Reverend Dr. Martin Luther King Jr.